Blackpool Keidokwai Judo Club was established in 1942. The club was originally an RAF judo club called the Kubukwai. This was formed under the guidance of Police Sergeant George Chew, who later achieved a Black Belt Third Dan. As the club progressed and judo became part of the training curriculum for many of the Blackpool Police the new name of Keidokwai was given to the club. The translation of this means, “The fighting spirit of the Police“.

The following articles from the Blackpool Evening Gazette show some of the earliest articles from the club, including an advert for a Judo Cavalcade which was held at the Tower Circus on Saturday 10th November 1962. This includes the finals for the North West Championships as well as katas, demonstrations of judo and unarmed combat. The event also showcased kendi an akido (this was the spelling used in the advert). 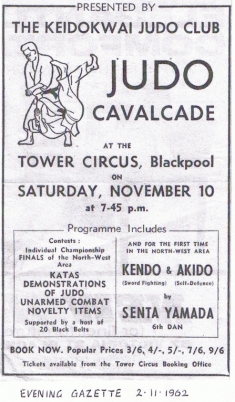 This demonstration type event was very similar to the events that Dr Kano the founder of judo used around the world to introduce judo to a new audience.

Over the years Keidokwai has produced and still to this day we have produced Regional, National and International competitors and Champions.